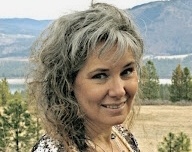 Welcome back to my Writer’s Heartland here in southern Oregon. I’ve missed you, but have been busy herding cats: promoting my Zuni-inspired fantasy novel, “The Stone Horse.” And writing a fire-investigator mystery novel.

Lately I am inspired by Carmen Peone. She’s an awesome friend, true lady of the West, a past president of Women Writing the West—and the author of notable YA and Romantic Suspense, plus haiku (who knew?) Please join me in welcoming Carmen to our literary ranch house.

Q: Hey, Carmen. Thanks for being a supportive friend and for writing such heartfelt, down-to-earth books! How do you see yourself, your role, in writing, today?

A: Thanks for having me, Carole. And congratulations on your new release, The Stone Horse. What a wonderful novella!  Well, first and foremost, I see myself as a literary entertainer. But one who covers important topics and issues like abuse, illness, and hardship. The good news is that my characters always find hope and love, family and friendship.

Q: Background us a “smidge’ on your life. How does that background and its recurring interests and themes continue to shape you and your work?

A: I live on the Colville Indian Reservation in northeast Washington State. All of my books to this point have either Native American lead or orbital characters and are set on or near Indian Country in Washington, Idaho, and Oregon. My husband and children are enrolled members of the Colville Tribe, and my grandchildren are either enrolled or direct descendants.

Having a degree in Abnormal Psychology, writing wasn’t on my radar until I moved to the rez and worked with tribal elder, Marguerite Ensminger, learning the Arrow Lake language (One of the twelve bands that make up the Colville Confederated Tribes). Living among the rich Indigenous culture is what cultivated the material I needed to begin writing, first for teens and now for adults.

Q: What main thing did you learn from leading “Women Writing the West?

A: Having coordinated the after-school program here on the rez, I knew the importance of teamwork. But with turning out a novel and curriculum, keeping up with a young horse and grandkids, and leading WWW, I learned how far I could be pushed and discovered my boundaries, which I’d pushed beyond healthy limits.

The good news is, I discovered I could handle more than I’d thought, just not too much. But to be honest, somethings came up in my writing where I had the chance to get involved in the homeschool community by creating workbooks to accompany my novels, and I took it. This was something I’d been wanting to do for some time.

Now that I’ve completed my curriculum and can reflect on my time with WWW, I can honestly say my WWW team was extraordinary and were an incredible support. I learned how dedicated the membership is. WWW is an incredible organization, and I urge those who write the west with female leads to join.

Q: What are your ideal writing habits? Have you a set number of hours, or words, to write a day?

A: Yes. As a full-time writer, my goal is 2000 words per day and five to six days a week. I track them to keep me on course. I write in two to three spurts a day as I have a small attention span and animals to care for.

Q: Tell us about your interest in writing haiku? Does poetry help your prose writing some way?

A: I began writing Haiku poems while coordinating the after-school program. Japanese college students have been visiting our community for about fifteen years or so and have taught me and my students how to write them. One day, I decided to pick it back up and use it as a tool to get my brain working in the morning before I start my writing day. I love photography and because the traditional Japanese Haiku poems accompany photos, it was a perfect fit.

The poems have to be tightly written, so yes, that does help remind me to keep my novels tightly written as well, cutting extra words that don’t need to be there. Why write five words when two will do and pack a more powerful punch?

Q: Are any of your young relatives interested in writing? What advice would do you give them?

A: Yes. For youth, I tell them to pay attention to their English teachers and learn spelling and grammar. For youth and everyone else, I tell them to get to know their characters on the most intimate level and that research makes their writing authentic.

A: I am a lover of the American Paint Horse. Especially tobianos and happen to own one. Buck is now twenty. He was my extreme challenge horse until he came up lame. Now he gets to hang out at the ranch and boss my nine-year-old half-quarter, half Morgan horse around. I also love photography. It’s fun to turn my photos into haikus and greeting cards. It all revolves around the culture of my novels and my lifestyle.

Q: Paint Horses! My favorite, too—no offense, other breed lovers.Have you a favorite oral story, Carmen, perhaps with humor, told by one of your or your husband’s elders?

A: “Coyote and the Origin of the Columbia River,” (both) of which I can view from my home, is one of my favorites. (Taken from Carmen Peone’s Girl Warrior Literary Guide.)

Origin of the Columbia River

Coyote (Sinkaleep) was traveling, and heard water dropping. He said, “I will go and beat it.” He sat down near it, and cried, “Hox-hox-hox hox!” in imitation of water dripping. He tried four times, but the noise never ceased. He became angry, arose, and kicked the place where the water dropped. The noise ceased. He thought he had beaten it, and laughed, saying, “I beat you. No more shall water drip thus and make a noise.”

Shortly after he had gone, the water began to drip as before. He became angry, and said, “Did I not say water shall not run and make a noise?” The water was coming after him, and increased in volume as it flowed. He kept on running; but still he heard the noise of water, and was much annoyed. Now he traveled along the edge of a plateau. There was no water there, nor trees. He looked down into the coulee, but everywhere it was dry. It was warm, and he became very thirsty. He heard the noise of water, but saw none. Then he looked again down into the coulee, and saw a small creek flowing along the bottom. It seemed a long distance away. He went down and drank his fill.

He ascended again, but had barely reached the top when he became thirsty. He heard more noise of water, and, looking over the edge, saw a large creek running.

He went down, drank his fill, and ascended again, but had not reached the top when he was thirsty, as before. He thought, “Where can I drink?” The water was following him. He went to the edge of a bench and looked down. A small river was now running below.

He descended and drank. He wondered that much water was running where there had been none before. The more he drank, the sooner he became thirsty again. The fourth time he became thirsty he was only a little way from the water.

He was angry, and turned back to drink. The water had now risen to a good-sized river, so that he had not far to go. He said, “What may be the matter? I am always thirsty now. There is no use of my going away. I will walk along the edge of the water.”

He did so; but as he was still thirsty, he said, “I will walk in the water.” The water reached up to his knees. This did not satisfy him; and every time after drinking, he walked deeper, first up to the waist, then up to the arms. Then he said, “I will swim, so that my mouth will be close to the water, and I can drink all the time.”

Finally he had drunk so much that he lost consciousness. Thus the water got even with Coyote for kicking it; and thus from a few drops of water originated the Columbia River.

Q: Don’t you love it? Thank you so much, Carmen, for the gift of your time and energy. Stay safe, write on, and have a wonderful Spring and Summer. 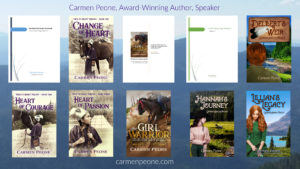