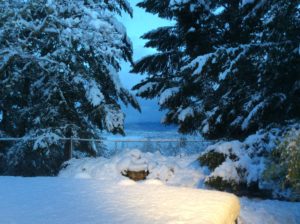 Dawn breaks reluctantly. Freezing fog cloaks the slopes around Little House on the Hill. Purple and ivory light turns trees and shrubs into malevolent aliens watching our every movement. Or lack of movement. For Rich, the critters and I have been snowbound — unable to drive down Kruger Lane — for four going on five days, now.

And we loved it. At first. Kind of. Made us feel like pioneers: resourceful, tough, vibrantly alive. Hold that thought.

The Big Snow started Monday, the day after New Year’s. The day we thought that a good, heavy snow would be fresh and fun, which we’d photograph like paparazzi on speed. The day we lazily watched the Rose Parade beamed to our big-screen from palmy Pasadena. LOVED seeing the Victorian Roses equestrian group show off their dresses and horses!

Rich and I aren’t Preppers. But our larders were stocked. We had five-gallon water bottles in the garage in case the well-pump died when a tree fell on a power line or something. The new snow shovel was in the shed. And we had books, satellite dishes and a drawer full of board games. We were all set. Bring it on!

It got brought. Oh, yes. Big time. More than a foot of beautiful but wet, heavy white stuff dropped almost relentlessly between Monday and today. It turned out to be the deepest snowfall in the recorded history of Southwest Oregon’s Rogue River Valley. Big whoop.

A neighbor drove his ATV partway up the drive yesterday to see if we were OK. But he couldn’t make it any further. And we couldn’t walk the half-mile down to the bottom. Too steep and slick. Our post office wouldn’t even deliver down there. City, county and city offices closed for a day.

What could we do? Just deal with it. We’ve napped, read, showered and slept. And shoveled the long paved drive and twin decks like inmates sentenced to hard labor. Rich shoveling driveway snow for five hours daily on a 20 percent grade reminded me of Sisyphus rolling the boulder up a hill for eternity, only to have it roll back down every time. The skies had the audacity to dump more snow the very night after he’d spent the day clearing the drive in hopes we’d be able to drive off Shadow Mountain.

Our Boston Terriers gave us dirty looks each time we let them out to do their business. Velvet the Welfare Cat refused to leave the comfort of her fuzzy bed and catnip mouse in the warm comfort of the garage. Not gonna lie! We aren’t in Montana. We weren’t truly prepared.

You haven’t lived until you’ve seen a wild-eyed, bedheaded, older lady hitch her bathrobe clear up to her ahem! and curse the icy flakes soaking her head and slippers while she foot-shoves snow from the doghouse and deck steps so her dogs can reach their potty under a Doug fir.

Sounds rough, right? Not to worry. I’ve taken full advantage of all this effective house-arrest by reading, writing, and napping. Repeating as necessary. Rich whipped me, quite ungraciously, I thought, in several games of Aggravation. But I beat him at Yahtzee! I inhaled a regular box of Cheezits in less than a week. Facebooked like a maniac. Played with the Bostons, the cat, the parakeet, even dust mice. Desperate times call for desperate measures.

I’ve also marveled at astonishing views out our windows or from our traffic circle, the few times the sun dared show its face. And managed to feel healthy, rested and, oddly, refreshed.

Today, the TV weather gurus say the snowstorms have passed. Yes! But temps will hover in the teens or twenties at night, so the existing snow ain’t going anywhere anytime soon.

I know. Many of you in far away parts of the U.S.A. and the larger world have it worse. Waaaaay worse. But, snowbound is snowbound. At least we have life, food and water, though increasingly less of the latter two. We have each other and our beloved critters. Plus, the Little House.

So it’s all good. The stuff of stories, and scenes in future books. A character-building experience. Surely some day we will share a laugh about The Big Dump of Twenty-Ought-Seventeen.