I love (and write) books where setting comes alive before my eyes. Where  characters live in a special environment that has an important role and becomes  a story “character.” Hence I enjoy the spare and evocative mysteries of Sharon L. Dean. She’s a New England transplant to Oregon, an avid outdoorswomam, a former English professor and my writing-group colleague.

Quiet New England (?) is home to some of the U.S.’s earliest European immigrants. To lovely vistas of farms, forests, fishing ports, tidy towns and the sea. No author captures its ambience or modern vibe better than Dean. Please join me in welcoming her to the blog today. Her latest book, “Calderwood Cove,” is due to be published June 8 by Encircle Publications.

CB: Sharon, thanks for joining us today. Your New England roots reach deep. Did you begin this book wanting to pay homage to an apparently peaceful beach community that may hide evil twisted roots?

SD: I’m not a Mayflower descendent. My Irish, Swedish, English ancestors arrived in Massachusetts in the late nineteenth century. No secrets there—just the salt of the earth, as the saying goes. I grew up near Concord, Salem, Plymouth, Lowell, Boston, the places where so much of New England history happened. My parents regularly took me to historic landmarks. When I studied and taught American literature, I focused on New England writers. Just nostalgia and my sense of history and place. No evil, twisted roots, I’m afraid. 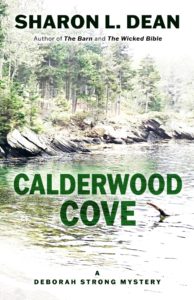 CB: Share about some of your background that played into the book. Places, people.

SD: I seem to always start with a sense of place. For “Calderwood Cove,” I drew on the many gatherings I enjoyed with my college roommates in the cove in Maine where two of them own summer houses. We’d joke about me writing a novel about all of us. The place is fictionalized, but based on the scenes of our gatherings. I assure you that the characters are entirely fictional.

CB: Fascinating. Tell us about the story, minus spoilers. What was  important for you to bring out?

SD This is the third novel in my Deborah Strong series. “The Barn” puts her in winter in her hometown in Southern New Hampshire where she uncovers the answer to a cold case death. The Wicked Bible moves her to fall on a college campus in New Hampshire where she discovers the connections between something called “The Wicked Bible,” a woman known as “the wickedest woman in New York,” and a letter by a nineteenth-century writer. Now in Calderwood Cove, Deborah finds herself on the Fourth of July in Maine.

Her suspicions follow her like the Maine landscape–plenty of sunshine, plenty of fog, and plenty of evening mosquitoes that arrive like the sparks of fireworks. Where is her friend Brenda’s husband? Where have Brenda’s caretaker and cook gone? Who is the anorectic young man who keeps appearing? Is one of them a murderer? Or is it the old woman who lives across the street, her son who runs an oyster farm in the face of global warming, her poet-tenant who lives in her apartment? Deborah even suspects each of the friends she grew up with. By the time she finds the answer, she is ready to leave Calderwood Cove where an idyllic summer retreat turned as deadly as contaminated shellfish. 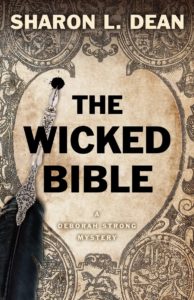 CB: What writing devices and beloved other writers helped power you forward?

SD: As my description of my Deborah Strong novels suggests, I love playing with the power of place and the different seasons that characterize New England. When I write, I find all sorts of lines that I know from my years of studying literature. I love weaving in history and often find unexpected things like the fact that the Native American Squanto had journeyed to what is now Maine. I also have fun sneaking in a few personal things that only those involved will know about—like the salt and pepper shakers I weave into Calderwood Cove.

CB: Do you make any sort of outline, or use a writing critique group? How does each one come to affect the final book?

SD: I usually start with a sense of place and a vague idea of where the novel will go. But then I let the plot unfold. I’ve been known to change the murderer more than once. My critique group––you, Clive Rosengren, Jenn Ashton, and Michael Niemann––are an invaluable resource. I draft longhand, type in revisions, show the revisions to my group, revise again––and again and again. Their comments come at the perfect time to move my writing along.

CB: Thank you for appearing in the blog, Sharon. Your insights are wonderful. I hope readers will check out your books, and tune in to a free Encircle Authors reading roundtable next Wednesday, May 4. It’s free, at https://www.becketathenaeum.org/events/eccentric-circles-readings

Readers, connect and learn more about Sharon L. Dean and her books at https://sharonldean.com/books/